Last week was momentous for Reading Writers. After nearly a year’s work, we were ready to reveal the fruits of our labour: a slim but solid volume of new writing.

Any new venture deserves a launch. So we were lucky to get a lovely big bright space for free at Reading Central Library on the Saturday before Halloween. The staff there were helpfulness itself, getting us sorted out with facilities for hot drinks and seating, patiently calming our worries about making sure guests and speakers knew where to go.

Early arrivals and set-up squad Rob, Andy and Miranda (with rock-solid support from Rob’s stalwart missus Clare) still had the twitch, though. What if no-one turned up? This was, after all, still a library, and we felt a bit weird about rocking up and making a racket. It goes against the natural order of things, right? And where was Charles with the most important part of the day… the books?

Come T-minus zero, though, our fears ebbed. Charles arrived with a car-boot full of booky goodness, and RW chums started rolling through the doors with cake and goodies. And there were other people! Even visitors from That London!

As Andy stepped up to the plate to make introductions, we had a roomful. 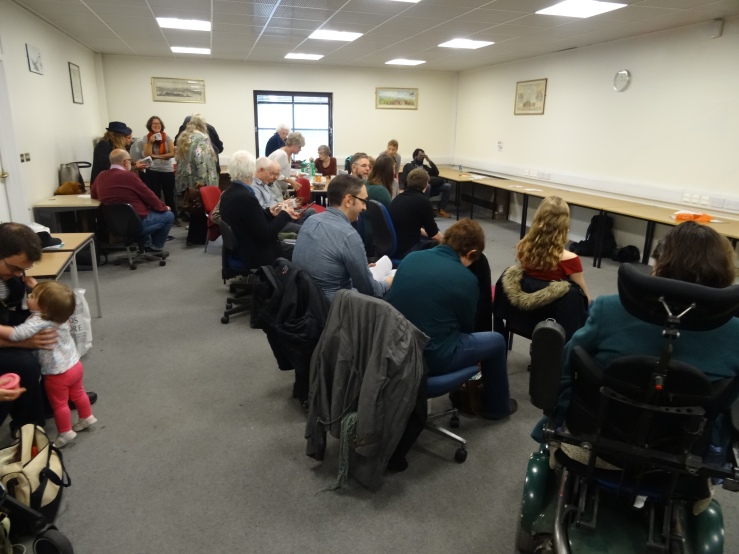 Obviously it was important to give our guests the chance to drink tea, eat cake and BUY SOME BOOKS, but we needed to provide a little entertainment as well. Chats from our secretary Andy and editor Miranda were followed by a short speech from the fine folk who run ABC To Read, our chosen cause. A Berkshire-based charity, ABC To Read helps to get kids reading, and gives parents the breaks they need to help them do the same. We’ve supported ABC To Read over our last two anthologies, and any profits made by Tales From Our Town will be going straight to them. 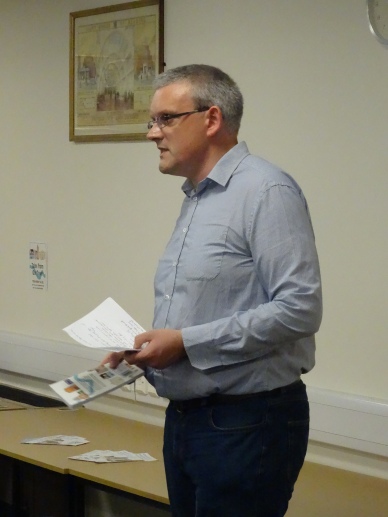 Andy gives it some MC action 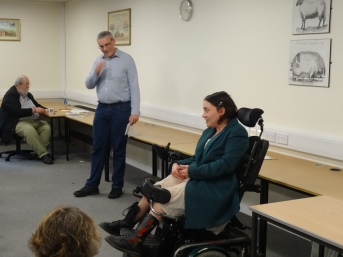 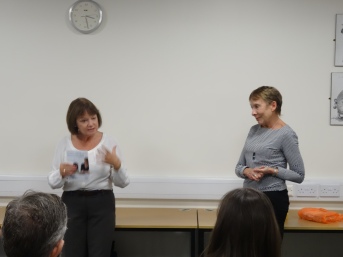 The ABC To Read team

Finally, we were onto the readings. Don Louth winner Steve Partridge gave us the opening of a grimly funny ghost story (set largely, yr humble webmaster notes with pleasure, at the end of his road). Juliet England reported a true tale of a saintly chemist. John Froy recited a poem about a famous Reading resident and rock star. Finally, Bob Billings recalled a moment of theatrical fireworks.

Andy finished proceedings with gifts for Miranda, proof-reader Julia and Katy O’Hare, who did an amazing job on cover design. Applause all round, then a final round of tea and cake and BUY MORE BOOKS. Charles, behind the merchandise desk, did brisk business, selling dozens of copies of Tales From Our Town. The special offer on all three RW anthologies did well too!

Before we knew it, it was closing time. Our launch was a roaring success, and marks the starting gun on promotional activity for Tales From Our Town. Look out for it at Reading Literature Festival events this month. Of course, it’s also available as an e-book right here: BUY THE BOOK.

Right, now on to the next one!

Reading Writers is a group of writers who meet twice a month in Reading, Berkshire, UK for workshops, critiques, and support. View all posts by readingwriters